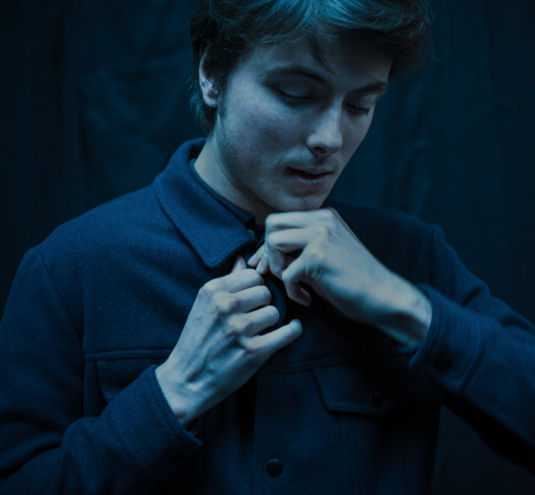 Bosse Provoost: The word appears in a story by Primo Levi. It is three-year-old Hurbinek’s attempt to articulate language. ‘Matisklo’ was the first and only word - his own word - he spoke before he died in the aftermath of the liberation of Auschwitz’.

Bart: Does that mean that unlike your previous plays, there will be speech in Matisklo?

Bosse: Yes, but it won’t be ordinary dialogue. And it won’t be out-of-the ordinary either, because there will be next to no interaction between the actors. I’m drawing on a late anthology by Paul Celan, Atemwende (Breathturn, 1967). It expresses the hope that with the fragments of language we have collectively lost, new language and so also a new reality can be created. The poetry is actually about what is and isn’t possible with language. At times it manages to show ‘from the inside’ what is really outside or beyond language. A world long before or long after mankind, words from the realm of death...

Bart: Each in their own way, Levi and Celan were both interested in how life can be lived after the Holocaust. Levi as the survivor of the camps, Celan as the child of Jewish parents murdered by the Nazis. Why is the Holocaust so important to you?

Bosse: Auschwitz is a compelling reference point for me. The very foundations of morality and humanity can be put to the test there, and then you almost have to conclude that those foundations are a sham. When I read Primo Levi, but for example also Imre Kertész, I feel an irresistible call for an ‘existential encounter with history’ that may well be doomed to failure. Anyway, for me their texts testify from the inside to a process of dehumanization. They may even make me reflect on what it means ‘to be human’ when that is no longer obvious. The question ‘Is this a human being?’ is central to my search for ways to have an actor appear as a seemingly half-human figure. It isn’t possible to come up with contemporary ‘fringe figures’ who keep this question alive.

Bart: What form can theatre that dares to ask such questions take?

Bosse: I am looking for a ‘Theatre of Understimulation’, in which sensual abstraction goes hand in hand with minimalism and absurdity. I want to make time visible with rhythm, and space with light. My theatre is mindful of emptiness, it even takes emptiness as the fundament so that heightened or unaccustomed attention is paid to what is there. But at the same time, I believe my work is also characterized by a strange lightness, humour or self-relativization.

Bart: Is it possible at this stage to explain that specifically in relation to Matisklo?

Bosse: The connection with Celan comes out in the all-important rhythm, the pauses between the words. Every pause helps determine the associations evoked in a spectator, they are ‘pregnant’ silences. And I’m going to work with visual artists Max Pairon and Ezra Veldhuis on the design of a number of very radical costumes made from various materials on which the human figure has left its mark. I want to have the materials of those costumes speak. What, for example, does a wetted cardboard body have to tell us? Or what does the ‘dumb’, ‘dead’ honesty of rubble say? That is a very different register of the imagination from anything an actor does.

Bart: You could say there is always ‘something missing’ in your productions.

Bosse: I believe there should always be something missing. It prevents us gaining a complete picture or insight. And though I want to withhold complete clarity from the spectator, there is great generosity in the abstraction I am aiming for. The playful, inquisitive or suspicious association with the mysterious or abstract ‘sign system’ that a stage play is, can sharpen the mind because reality can also be approached as a jumble of signs. In my work I try to address a spectator rather than an audience. For me, individual reflection, imagination and uncertainty carry more weight than the formation of a temporary community.