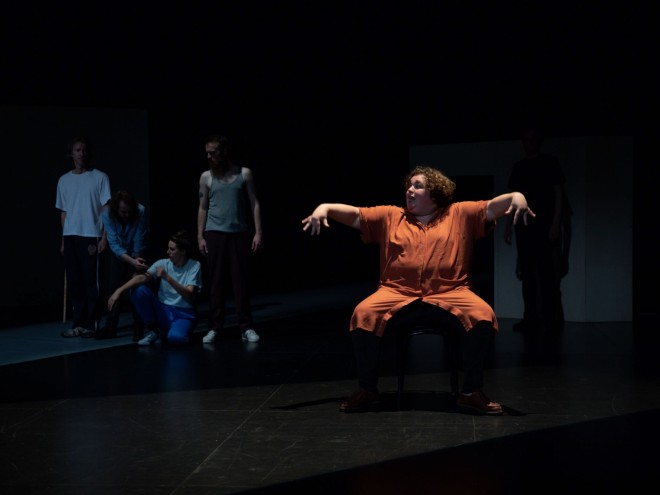 When Pretending Is Also True

Madmen and Specialists (Gekken en Specialisten) is a play by the Nigerian writer and Nobel Prize winner Wole Soyinka. Soyinka, born in 1934, is a poet, playwright and essayist. He has worked in Europe and the USA as well as in Nigeria, and his critical view of corrupt and authoritarian (post)colonial regimes made him one of the important voices in the decolonization wave in the second half of the twentieth century. This criticism was not always accepted in gratitude, however, and on several occasions, Soyinka ended up in prison. His work combines Western influences with his own background as a Yoruba, one of the large population groups in Nigeria, Benin and Togo.

Soyinka wrote Madmen and Specialists in 1970, after almost two years of imprisonment during the civil war in Nigeria (also known as the Biafran War). More than a million people died as the result of a famine at the time. Although you can read the play against that background, Soyinka avoids explicit references in order to reveal a more universal dynamic, and so it can be about any conflict. The play starts with Doctor Bero arriving home from a war. He is met by his sister, Si Bero, and a group of Beggars, veterans of the same war. The father of the two siblings, referred to as 'the Old Man', was also involved in the war and has returned as well. The war and the violence left no one unchanged. Si Bero devoted herself to the traditional herbal teachings of two old women, Doctor Bero became a high-ranking figure in the secret service, the Beggars are physically and mentally crippled and the Old Man established a mysterious cult of 'As', which he describes as a “piffling battering ram at the idealism and the purpose of this time and history”. He subsequently becomes pitted against his son in a conflict about the sense and senselessness of violence and power.

In this play, Soyinka juxtaposes different worldviews. For Doctor Bero, reason and unbridled power over the bodies and lives of his subjects are the ultimate values; everything has to give way to this system. He even goes so far as to destroy the bodies he wants to control through his torturing of them (euphemistically described in the text as 'practising'). With the figure of Bero, Soyinka formulates a harsh critique of ideologies that are too straightforwardly pursued. Many democracies and other regimes based on values and norms enshrined in laws degenerate at a certain point into their perverse opposite. In the West, Nazi Germany is of course the clearest example of this, in which a bureaucracy turned into a fascist dictatorship in an almost legal manner. In the context of the African continent, the violence of imposing such an 'Enlightened' system also became clear, both in the hands of the colonizers and the local rulers who succeeded them.

For the Old Man, the ultimate ideology is precisely that there are no fixed values and that pretexts always fill that void. You could call this worldview ‘absurd’, and it is no coincidence that Madmen and Specialists is often called an absurdist play. For the Old Man and his cult of As, everything is both true and not true; there is no core that holds everything together or provides direction. This absurdism or, if you will, nihilism, rejects any basis for power. It provokes and confronts systems, encourages their perversion and unmasks dogmas as illusions. Away from religion, away from basic values or laws, the only truth is that there is none. On the one hand this seems liberating and positive, and it can drive people to search for their own values and self-development. But once they have an insight into the absurdity of reality, there is no turning back. A power vacuum can also lead to a continuous conflict between truths and a growing individualism, to insecurity, violence and madness. A telling example of this is how the Old Man serves human flesh to Dr Bero and his cohorts in order to confront them with the inhumanity of their system. It has the opposite effect, however: in their hunger for unlimited power over people’s lives, cannibalism is literally the last taboo. Once power has been infected by absurdism, it no longer has any restraints; the unmasking of the system is precisely what radicalizes it. For Soyinka, the absurd and the rational worldviews are engaged in a continuous interplay. He exposes the cruelty and dehumanization of both, in a confrontation between a calculated homicidal vision and a creative but ruthless rejection of any kind of stability.

Soyinka also writes from another perspective. The Western dynamic between rationality and absurdism, strong as it may be, gains a specific nuance through the influence of Yoruba myths. In this third worldview in Madmen and Specialists, represented by Si Bero and the Old Women, good and evil cannot be separated. Quite the contrary, they are part of each other. In every creation there is destruction, and vice versa. This vision, grounded in the Earth and in ancient knowledge, does not make things any easier. And although it seems to be on the sidelines in comparison with the great absolutes of Doctor Bero and the Old Man, it also presents a dark threat.

When reading or watching Madmen and Specialists, you get the feeling that none of the characters in the play can really be trusted. This is also because an important part of the text is devoted to explicitly ‘acted’ sections, grotesque ‘plays-within-the-play’ that disrupt the whole. Pretending, 'acting as if’, is not innocent, and pretending one thing questions the sincerity of another. The fact that it is mainly the Beggars who perform these 'plays within-the-play' makes them more than mere victims of a particular system. By acting them out, they confront Bero with his cruelty and give shape to an absurd world. Moreover, in the version presented by Tibaldus, even the stage directions lose their stability: they are sung on stage and are part of the theatrical event. This creates a world in which facts and appearances are no longer distinguishable from each other and in which there seems to be no objectivity of any kind. As a spectator, you end up in a strange loop: a convincing performance of something now looks like semblance and pretence. As a result, you can also start looking at acting and characters in a different way: Is this an attempt to convey a truth, or is it unrelated to any truth at all, and does that immediately make it false and untrue? What is ‘acting rationally’ and what is ‘acting absurdly’, especially when both paths lead to a similar cruelty? Whom can you still believe? These are questions we might also ask ourselves when we read, hear and see politicians, opinion makers, experts and others expressing all kinds of views in the (social) media. It becomes an impossible navigation between falsehoods, and thus also an exercise in self-examination: perhaps we ourselves resemble the Beggars, looking for a pittance of truthfulness, crazed by the maelstrom of (false) news and (alternative) facts.

These issues make Madmen and Specialists (translated into Dutch as Gekken en Specialisten by Marijke Emeis especially for this production) a play that fits in the line of research into the fundamentals of acting that Tibaldus has done in recent years with the work of Witold Gombrowicz. Also in Yvonne, Prinses van Bourgondië (Yvona, Princess of Burgundy) and in Het Huwelijk (The Marriage), the collective’s two previous productions, what was at stake was the acting in itself. A word or a gesture could create something out of nothing. In Gombrowicz's plays, traditions and values are unmasked as forms and habits that we imitate and make our own, as 'performances'. The plays of Gombrowicz and Soyinka make acting itself political. Not only the story and the words, but also how all this is embodied and said, and how that undermines everything else, tells something essential about being human. However, there is a difference between the two playwrights. Whereas with Gombrowicz the individual still had the possibility of shaping himself in a playful way, with Soyinka that shaping is already a part of conflicting ideologies. The former could start from a blank page and criticize traditions; that was indeed his grand gesture. With the latter, there is conflict by definition; even the blank page is a battleground for him. In Madmen and Specialists this condition is captured in the game with the Old Man’s 'cult of As' and what he calls “the moment’s political As, the moment’s scientific As, sociologic As, economic, re-creative ethical As, you-cannot-escape!” There are always different 'As’s’ entering and exiting the world stage, different ideologies competing for power. This system has many masks. Whether it be a mitre, a kepi, a crown or a toga, they are only variations in terms of form on the same urge for power.

The Ancient Greeks made a distinction between statements that could be true or false, and statements that primarily produced an effect, the ‘performative statements’. In our fluid times, in which science is under pressure and uncertainty is used as a means of destabilization, one could almost forget that such a distinction ever existed between truthful statements (which say something about reality) and performative statements (which create reality). The latter group has taken the upper hand and disguises itself as truth, resulting in chaos. After all, if everyone departs from the truth, then it becomes very difficult to do anything about an insight into someone’s lies. Madmen pretend to be specialists and drive the specialists mad – or at least so it seems. Once you abandon the truth, anything becomes possible; think of the often contradictory communication strategies of Putin-like and Trumpian figures and their transparent lies. Various systems (religions, ideologies...) claim to have a monopoly on truth; and perhaps combating a particular monopoly on truth is worthwhile, but then the question is: Where do you end up? Placing yourself outside of such a system or being critical of it is not without its risks. As a system develops, it pulverizes the space for autonomous thinking, for art, research, journalism; this pulverization is what Soyinka calls 'practising' in his play. And yet, the figures of the Beggars suggest that it is only when you have become useless to a particular system that you can start playing with it. Madmen and Specialists evolves into an increasingly grim cocktail of pretence and violence, until the whole thing can only abruptly explode. The explosion in this play is inevitably ambiguous: are destruction and bloodshed the only outcome of an absurd power struggle, or does humanity have to make a mad leap in order to start all over again?