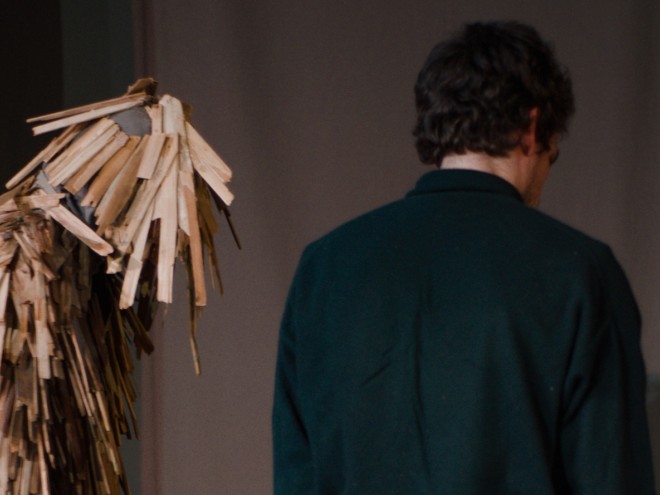 Bart Meuleman: How do you and Bosse work together? What is your role?

Geert Belpaeme: my involvement in this project is as the dramaturge. Bosse and I had to work out exactly what that meant because I have never done the job of a dramaturge before. We had already worked together in various combinations. I had a part in Herberg, which Bosse made with Kobe Chielens. Later on, we made The Act of Dying together, under the De Polen collective. Recently Bosse and Ezra also created the set for my show First. Bosse had asked me to look at Matisklo with him and gradually we started to call it a ‘dramaturge’s position’. But actually we are both involved as ‘makers’.

Bart: Because you are all makers as well?

Geert: Yes. Exactly what a person’s position is in this work process is a bit hazy because we all do the looking, thinking and imagining together. But at the same time, each of us also has another responsibility. That brings clarity to our collaboration.

Bart: With Ezra that responsibility is ‘set and lighting design’. With Max ‘costumes’ or ‘figures’. What is yours?

Geert: As the dramaturge, in a manner of speaking I try to look from a distance at the material we have and at the whole, at the montage, and I try to assess the meaning it conveys. I compare it to what I have previously discussed with Bosse, with what we really want it to mean. So I analyze things and try them out. I do that for the lighting, for the acting, for the costumes and how we use them, and for the poems we have chosen. I try to work out the best way to bring it all together.

Bart: Can you explain what you are aiming at?

Geert: Celan wrote from an awareness that, since the Holocaust, it had been almost impossible for language to bear witness to ‘that which happened’. Almost everything was ripped apart, disabled, broken, with the exception of language.

Bart: But language was also broken.

Geert: Yes, but then that broken language contained new possibilities. I think Celan saw language as something natural, like plants or trees which are capable of regeneration. They are never completely dead. In that sense you feel a sort of incompleteness in his poetry, an incompleteness that is also inviting. What is written down only begins to live again when it is read. It is an invitation to imagine. Matisklo is our response to that invitation. The language goes right through you when you recite Celan’s words. You become its medium. At that moment, the language can begin to grow again. And not only do we start to speak to Celan, but we start to create our own images from his linguistic landscapes. In so doing, we don’t visualize his words, but we accept his invitation to indulge our imagination. That’s also how I read Celan. He writes about language a lot, sometimes also about the language that came before and goes beyond mankind.

Bart: I don’t understand that. After all, it was the human species that invented language. It wasn’t there before people and it won’t be there when they no longer exist.

Geert: That’s true. But what human beings create with language transcends the individual. Language is kept alive by the way people avail themselves of it. It is much bigger than man. Reflecting on ‘a language beyond mankind’ is an exercise of imagination. Celan imagines a world after human beings, a world in which language lives on. In the same way, he writes about language or linguistics in or of things. For Celan things as well as people can speak.

Bart: So for Celan language is about more than communicating. Language can lead a life that is inconceivable for an individual, it can take ‘unimaginable’ forms. But never after human beings, surely? How am I supposed to imagine a language after people? Could it be that Celan wants to present a world without people? That’s a highly romantic notion.

Geert: We view everything anthropocentrically: everything exists by the grace of mankind. Celan imagines a world beyond mankind, as he literally says in one of his poems: ‘There are still songs to sing beyond mankind’. He wrote that in the context of an extreme event, the Holocaust, which set out to dehumanize a large group of people. In that grey context, Celan finds hope in
imagining becoming part of the earth, the plants, the roots. That world exists and sings, even without us. Through his language he tries to touch the abyss where humanity ends, where something begins outside the human.

Geert (laughs): I don’t know. The unnameable! There is so much that is outside the human, but we cannot know it without damaging it. That is where every language falls short, even Celan’s language, because everything that is written down is still human. And yet at the same time everything is possible in language. Celan realized that. Everything is broken, with the exception of language. Celan tries not to touch the inhuman, he tries to induce it.

Bart: You can also see it as science fiction. Or at least more as a mental exercise than a reality to strive for, because then you are striving for the elimination of everything human. And that’s exactly what the Nazis strove for vis-à-vis the Jews. Do those worlds meet?

Geert: You feel how those things are intertwined. The burden of history and of testimony which he carries comes, of course, from that idea of destruction. At the same time, he longs for his own elimination, his own destruction.

Bart: Actually that extreme exercise of imagination about a world before or after or without people hurls you back to the here and now. So that you contemplate that life in the here and now.

Geert: Celan asks himself: why in God’s name that overriding desire to live? I have chosen a number of poems as examples. The last poem certainly contains the essence of his linguistic vision. A word as a plant, with all the potential of a plant. Language that has the ability to ‘transplant’ itself. Celan invites us to follow the language. To follow the word. I find that really beautiful.