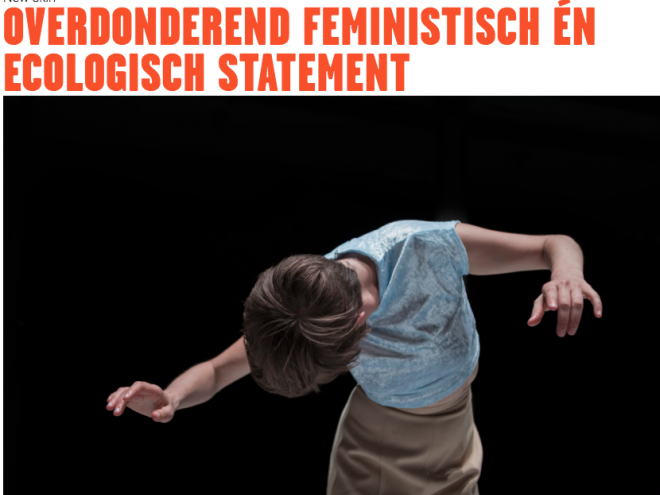 New skin by Hannah De Meyer is about being born: out of but also in the bowels of the Earth, bringing with it millions of years of cultural and biological history under the skin of the newborn. This solo makes us aware of our inseparable connection with our cosmic origins.

Hannah De Meyer has written – no, sculpted – a lava flow of words that instantly solidifies into memorable images. She takes you through the origins of everything that exists to the point of her own self-conscious awakening, as a person, as a woman, as an independent being. Continually switching back and forth between the ‘I’ persona and the larger whole, new skin is not a monologue but a polyphony in which primeval voices can be heard.

The scouts from Antwerp’s Toneelhuis have a sharp eye: De Meyer (born in 1988, graduated from the Performance programme at Toneelacademie Maastricht in 2015) is both an exceptional playwright and a talented performer. With Solace (2015), her grim relationship play, she won the Artes award for young playwrights, after which she made the exuberant ÜBERDRAMATIK  (2016), and then in 2017 amazed audiences at Theater Aan Zee in Oostende with Levitations, an edifice of ideas that she constructed stone by stone, word for word, in a solo performance on a bare stage, articulating each phrase with her feline body.

Toneelhuis asked De Meyer to participate in P.U.L.S., the large-stage trajectory for young theatre makers, but the recent half-time score reveals uncertainty as to whether De Meyer will ever do something for the large stage. So far, her work is best suited for the black box and the physical proximity of the audience. In that intimacy, she succeeds in creating a hypnotic universe merely with her words and body.

Which is again the case with new skin, a performance in which each word seems to spontaneously give birth to the next. De Meyer begins the performance off-stage. Welcoming us with her voice from the wings – Hi restless souls. How are you tonight? – she makes us aware of the context in which we find ourselves: we are in a theatre, here and now. The show might look like a solo, but it is the result of the collective effort of technicians, a costume designer, a lighting designer…. Similarly, De Meyer is not just her own spokesperson when it comes to content; sources of inspiration like Patti Smith, Mohamed Barrie and Ursula Le Guin also speak through her, along with a lot of other names from the feminist and/or ecological movements. By extension, she points out that every person is an archive in which the history of the universe is stored, so that stardust, matter, plants and animals also manifest themselves in human beings.

Perhaps this explains why we finally get to see De Meyer for the first time in the guise of a … reptile? Or some prehistoric being? Her tongue and lips make popping and clicking sounds, her torso sways back and forth above her pelvis, her somewhat bulging eyes stare at us like those of a gecko. Only momentarily do we get to look at this fascinating apparition, however, for the stage goes dark again as De Meyer takes us to the pitch-black absolute zero of before – before the Big Bang. Once again, it is simply her voice that stirs the imagination. The singsong diction, still bodiless, guides us through evolution step by step, from the first light and life to the point when we finally can be born in a body. We wander around in a post-apocalyptic future where wall paintings and videos testify to the manner in which previous humans (man!) fought themselves and their planet to damnation – in short, an illustration of the present human condition.

Within this new human(kind), the unrest of all their predecessors can be found, but De Meyer commands them to look outward, at their connection with the planet, and then also to look inward, at the umbilical cord that connects each individual with the countless ancestors lying deep within themselves. Now she narrows the narrative: from the origin of the universe and our planet via the origin of humankind to her own origin, her birth. And she begins to dig. In herself, under her skin, through flesh and bones, and at the same time through the many layers of the Earth – for digging in oneself is digging through time, to the subconscious, where pain is stored, and vulnerability. She digs in her own body and in the collective body of the Earth, until she arrives at the core: a fluid heart of lava. The journey is an awful one; De Meyer howls like an animal, you sit in trance listening to the sounds of this yowling, suffering being  – struggling to rid itself of its helpless stupidity.

In new skin, De Meyer replaces the attainments of the present Anthropocene (which focuses on individuals and their needs) with a more holistic vision. There is an unmistakeable religious undertone in the images she uses (Biblical winds, a burning heart), but the idea is fundamentally pantheistic: when every part carries the greater whole within it, we had better take damned good care of everything called life. De Meyer’s vision of the relation between man and nature is not sentimental, by the way; her discourse contains not a trace of romantic nostalgia. Nature is a cruel and indifferent primal force, in the face of which man must be humble. A softening factor, however, is the continuing possibility of regeneration. The grandmother who cradles her newborn grandchild will be cradled by that child when she dies – and so life carries on, endlessly shedding old skin.

Hannah Arendt characterized man as a creature with the capacity to ‘begin’ and situated the political and social motor of change in this possibility of continually beginning anew. The emancipatory significance of new skin does not lie in the series of names that De Meyer lists as her sources of inspiration at the start, but in the way in which she reveals that something like this – being reborn as a person, as a woman, as a woman who dares to be (sexual), who dares to speak out – is possible on many levels . (In her personal story, the psychoanalytical approach is apparent in the connection between sexual awakening and the act of speaking.) By putting the female body on a line with the geological body called the Earth, De Meyer not only gives voice to her own consciousness but also to all other elements gathered under her skin – the inner landscape of rocks, planets and ancestors. This is a feminist and an ecological statement in one, at once very personal and intimate – at times exhibitionist – and very political.

It is true indeed: new skin is not a monologue; it is an overwhelming polyphony. What a script, what a performance. What a production.