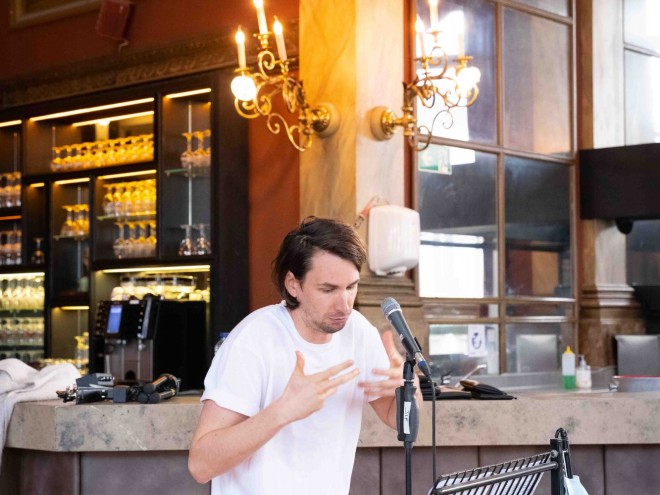 The cricket wakes up one morning with a strange feeling in its head. It is a heavy, unshakeable feeling, that does not want to go away. He doesn't know exactly what it is, but the ant makes it clear to him that he is plagued by gloom.
The healing of the cricket was crowned with a Golden Owl in 2000 and that is just one of the many awards Toon Tellegen has received for his work. The animal stories starring the cricket, the ant, the squirrel and the elephant form an important part of the author's oeuvre. He wrote many more, all of them poetic and philosophical allegories that are read by young and old alike.
Toon Tellegen is a much-loved author in Toneelhuis. During the years, Toneelhuis made Het vertrek van de mier, Middenin de nacht, SWCHWRM and 313. Misschien wisten zij alles. On the occasion of the last Radio Toneelhuis broadcast, Guy Cassiers invited not only Toneelhuis makers and actors, but also a delegation of staff to take on various animal roles. From costumière to production manager, from ticket coordinator to public worker, from head of planning to personnel manager, from attendant to building manager, they all crawled into the skin of an animal from the large animal forest!