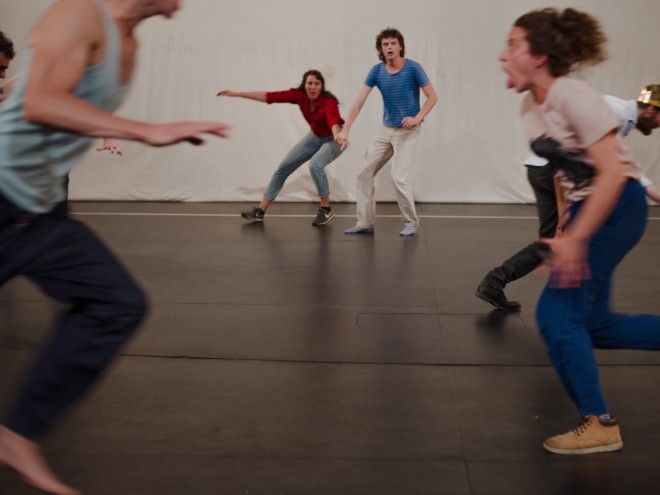 "The staging possesses the simplicity and cruelty of child's play. Simplicity because the theatrical is based solely on the play of the actors in jeans and T-shirt; cruelty due to the Machiavellianism of the main character Henri. Right from the start, Flemish polyphony becomes part of the performance, just after the name of each character is shown on the screen. This polyphony returns regularly as a commentary, in successive waves that reinforce the atmosphere of a Shakespearean drama. Each actor has several roles and slips inconspicuously from one to the other, changing face. As is the case with children in their play, the gender is easily changed - for example, the mother is played by a man. The theatrical is created by an aesthetics of the everyday, sand castles are built that are quietly flooded and destroyed by the sea.

The actors of the Collective Tibaldus met in a theatre school and wanted to deconstruct the theatre in order to come to a new lecture. They focus all their attention on the actors and the narrative and question the theatre, the actor's relationship to the text. With an admirable energy and their permanent presence on stage, they go through the play like sleepwalkers. Henri creates the dream and the dream creates Henri; one situation leads to the next and the actors change status; they balance between play and no play. At a certain point they become spectators themselves and desacralize the theatre. A square drawn in chalk on the ground marks that transition".