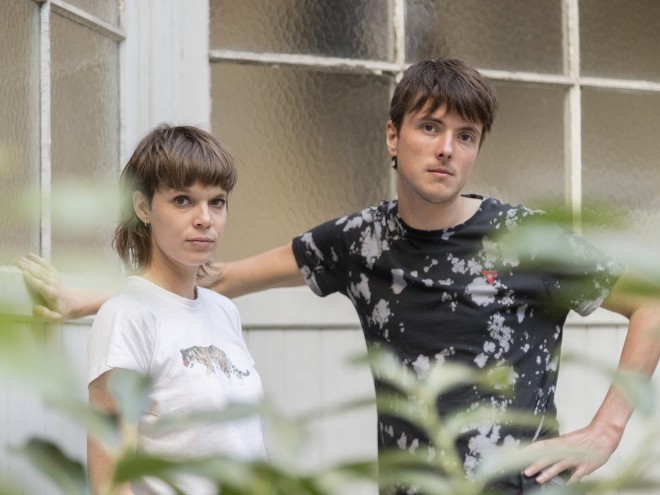 The concept of ‘nothingness’ is so impossible for us to imagine

Four people worked together on this from different artistic directions. How would you each describe yourselves as makers?

Ezra: “I’m a visual artist; I studied at the Atelier Schilderkunst. But during my studies I was already very involved in multidisciplinary work; for example, I made installations out of paintings, sometimes as big as seven meters high and three meters wide, with the aim of creating an extraordinary spatial experience for the viewer. Now I also make films on celluloid, light installations and work mainly as a scenographer and lighting designer for performances.”

Bosse: “I have an education in theatre, but I find it very hard to pin my work down to one medium. I am a performing artist in the broader sense, and in that capacity collaboration is really the primary focus for me. I try to bring people with a certain human and artistic skill set together in an exciting configuration. I also always start with a variety of sources. Working with different images, philosophical and literary texts, ideas that come out of conversations, I intuitively try to build a world, and then I bring in different people to work on it. My artistic practice is always based on language and collaboration.”

How did you come together in that practice?

Ezra: “The collaboration between the two of us started when Bosse invited me to do the scenography and lighting design for Matisklo, a show that Bosse made in 2018. For an artist working with light, a theatre space offers really incredibly interesting possibilities, and we wanted to explore those further together.

“What I like about our collaboration is that it mostly comes from conversations and mutual research. As a visual artist, you’re often very much on your own. Once we have a concept for a show, I often already have ideas for concrete images that I want to make. Bosse needs more time before he starts working in a concrete way, but I very soon become itchy to start making and seeing the images, in order to work further on the content.”

How would you describe your mutual research?

Ezra: “With me, ‘light’ has been important for a long time. We often think of light as being what makes the world around us visible, but I like to make people look at light itself, at its subtlety. When Bosse and I met, we discovered we have this fascination in common.”

Bosse: “It’s sometimes hard to articulate, because it’s about light in relation to an experience that is almost metaphysical. But when you say it like that, you quickly end up in a religious realm, something that has to do with God – which is very unsexy and also essentially far removed from what we do. Although it’s not about a belief in a higher power, it’s nevertheless a kind of sensory experience in which the matter-of-course nature of our perception of things is briefly called into question and becomes uncertain or exceptional.”

This online expo was based on your performance SUN-SET. What was your starting point there?

Bosse: “With SUN-SET we ended up with ‘cosmogony’, which is a complicated word for a creation story, but can also refer to the moment in which something is created out of nothing, a ‘creatio ex nihilo’. In 2019, the two of us saw an exhibition at the Met in New York about Polynesian creation stories. We found it fascinating that the void that the Polynesians imagined before the creation of the world stretched across eons, and that they imagined this void as being something very dynamic, a void full of potential.”

Ezra: “We became interested in how other creation stories dealt with the concept of ‘nothingness,’ and how in most of these stories light played a key role. ‘Nothingness’ is so unimaginable for us humans as a concept that we cannot help but imagining ‘something’, and if need be, ‘something that behaves as if it were nothing’.

Bosse: “The fact that ‘nothingness’ is inconceivable for us holds true even at the sensory level. For example, there is the phenomenon of ‘eigengrau’ (intrinsic grey), which occurs when we are completely in the dark for a while and our brain cannot cope with the fact that there are no stimuli at all, that there is nothing. Our brain then produces a dark grey colour that is not there, a kind of unspectacular hallucination.”

In SUN-SET, the focus was on a transformational theatre. Beyond the Black Box now takes place online. How has that changed your practice?

Ezra: “We were planning to make this film before we knew that Beyond the Black Box was going on online. When we started shooting, we still had the idea that the work would be an installation. The film would be screened in a darkened black room. Now that it’s online, of course, that couldn’t happen, so now everyone has to build their own installation by crawling under a blanket. It’s supposed to give you the feeling that you yourself are the mysterious, shapeless figure in the film. Benjamin edited the film with this idea in mind.”

What have you learned as a maker or as a person from this experience with online performances?

Bosse: “I used to think there was rather a lot of idolizing about something like ‘the collective experience of the audience,’ but now I see more of its importance. The first few performances we will be able to see live again will be very special, I think. To be able to sit together again and focus on something. Theatre is one of the rare places where you are forced to look at and listen to something. That’s what I love most about such a space and such a venue, that you can ask that of your audience and they expect you to do so, and I really miss that now.”

Even a Sun Disintegrates Now and Then was featured in the online edition of Beyond the Black Box via its streaming page in February 2021. Beyond the Black Box is De Brakke Grond’s multidisciplinary festival where you can discover new artists who break through existing conventions and experiment with hybrid forms.