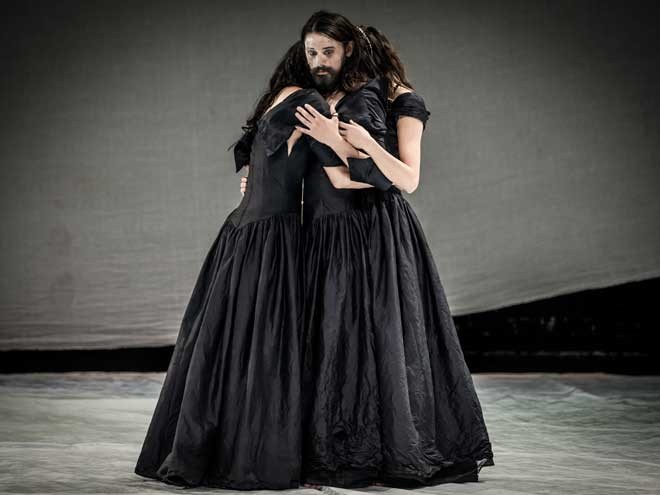 The wound we call family

All tragedies are family tragedies: from Agamemnon who sacrifices his daughter to the gods to go to war against Troy, through Phèdre who falls desperately in love with her stepson, Nora who abandons her husband and children, to the emotional calvary of Frank and Simonneke. Hamlet is also a family tragedy. And how! The old king dies and barely a month later his widow Gertrude marries Claudius, the dead king’s brother. Hamlet not only loses his father but also his trust in his mother. When the ghost of the dead father comes to tell him that Claudius is his father’s murderer, Hamlet is overcome by helpless anger and deep depression. He cannot bring himself to take revenge as the ghost instructed him. And when he eventually does, it turns into a bloodbath.

Theatre-maker Lisaboa Houbrechts has taken the idea that all tragedies are family tragedies very literally. She rewrote the sprawling plot of Hamlet and turned it into a tragedy of blood ties. In her version, Hamlet is a story of the entanglement of two families: Hamlet’s family, Gertrude and Claudius and that of Polonius, chief counsellor to the king, Laertes, his son, and Ophelia, his daughter and the woman Hamlet loves. It is between these six characters that the drama unfolds. It is an incestuous, closed world and the darker it becomes, the more psychedelic the costumes.

Lisaboa crosses these two fictitious families with a third, a ‘real one’ this time: the Lauwers-Barkey family. Grace Ellen (Gertrude) is the mother of Victor (Hamlet) and Romy Louise (Ophelia). Husband and father Jan Lauwers (the dead king) appears as a more than life-size portrait photograph. That interconnection of families produces a disturbing hybrid. The duplication of the fictitious relationships and emotions of the characters with the real relationships and emotions of the actors gives the play an uncomfortable intensity. Who exactly is speaking? The character or the actor? Where does the fiction end and where does the biography begin? Or vice versa?  Who is settling scores with whom?

Hamlet is a revenge tragedy. Thomas Kyd (1558-1594), a contemporary of Shakespeare, is regarded as the inventor of this new genre. In his play The Spanish Tragedy, Hieronimo, a Spanish nobleman, is driven to madness by his son’s murder. When between fits of insanity he discovers who the murderers were, he carefully plans his revenge. He kills the murderers and then himself. The raw, explicit and bloody violence of the revenge tragedy sent shockwaves through Elizabethan and Jacobean England.

Shakespeare takes over the formula of revenge tragedy, but bends it to his will. He postpones the revenge until the end of the play and allows plenty of room for Hamlet to express his doubts and melancholy in long monologues. So as well as a tragedy of revenge, Hamlet is also a tragedy of mourning, of processing, of introspection and internalization. The rhetoric of the protagonist is a journey to the depths of consciousness. From then on tragedy is less about external events which happen to someone than about his innermost feelings. But that concentration on Hamlet’s inner self has its consequences. Hamlet has become too big for the play. His consciousness distorts the drama and puts all the other characters in the shade.

The role and the presence of Gertrude and Ophelia, the two women in Hamlet’s life, are restricted, bound as they are by certain historical and ideological conventions about women’s position in society. Gertrude’s and Ophelia’s silences in Shakespeare’s drama, however, provide the perfect slots for new stories. For Lisaboa the key to the tragedy lies in Hamlet’s relationship with his mother and with Ophelia. So the production doesn’t open with the ghost of Hamlet’s father. When the curtain goes up, it is a tormented dancing Gertrude who appears on stage.

In Lisaboa Houbrecht’s production it is not the ghost of the dead father who perplexes and haunts Hamlet but the body of his mother. Hamlet is much less a play about revenge than a play about desire. Or to put it another way, if it is a play about revenge, it is revenge on the mother, on the woman. Hamlet’s psyche is shocked more by his mother’s lust than by his father’s murder. Or to be more precise: by the lust he projects onto his mother. From the outset Gertrude makes it clear that her marriage to Claudius was performed not for reasons of loneliness, never mind lust, but in the interest of national security, for a foreign enemy is threatening the country. Gertrude shows she is a states-woman. It is Hamlet who pushes her back into the alleged lust that makes her a bad mother and unfaithful widow. The price he pays for that misogyny is high.

Both his mother and Ophelia try to free Hamlet from the darkness of his soul. But in vain. In this production, too, both women are victims of the corrupt, manipulative and cynical world of Claudius, Polonius and Hamlet. But here they are no longer weak-willed and voiceless. It is no accident that in Lisaboa’s version Gertrude appropriates statements which belong to Hamlet in Shakespeare’s play, hurling in her son’s face the words: “I have to choose / if I am not to lose./ And you? What have you done? You spend all your time following around the ghost of your father / Because your name is frailty”. The weakness changes camp. It now lives in the body of Hamlet who roams the stage driven by his morbid consciousness and his obscene, (self)destructive libido.

In one scene Gertrude, Ophelia and Hamlet wear the same long, black dresses. And it stands to reason, not only because Grace is the mother of Romy Louise and Victor, but also because the whole play is a struggle about and with women and femininity. It would be too weighty and perhaps also too simple a statement just to claim that Lisaboa Houbrechts made the female silences in her Hamlet speak. You don’t turn silences into speech just like that. But on the borders of language, in the dancing and shouting of Gertrude and Ophelia, we see seeds of resistance which, it is true, is (literally) killed off, but manifests itself again in the last scene of the play.

In Shakespeare’s version, the young Fortinbras, who represents a new order, appears at the court. He is an alter ego of Hamlet: “I would have been a worthy king like him”, says the dying Hamlet. But that is not what we see. Lisaboa gives us a mirror image of Hamlet: the same costume as Hamlet at the beginning of the play, but played by Romy Louise (Ophelia). The femininity banned by Hamlet (also from himself) returns in a mocking, dancing, ‘queered’ version of himself... And the rest is silence.