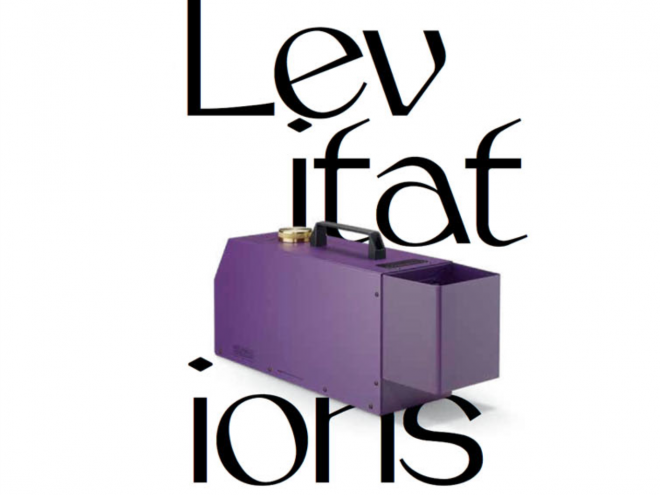 I am pleased to announce the publication of two scripts by Hannah Demeyer: Levitations and new skin, in a design by Chloé Dauwe and Ine Meganck and with a striking photographic contribution by Dries Seghers.

Hannah has a habit of continuingly asking questions throughout the creative process, which has already resulted in some drastic decisions being taken. During both of these processes, artistic collaborators walked out, including a sound designer and a team of actors – a regrettable affair from the human side of it, but from an artistic point of view perhaps the right decision after all. This has twice led to very strong, solid productions; I would use the word ‘pure’ if it did not raise the wrong associations. And so I hold the scores of those productions here my hands.

Do they reflect their turbulent history of development? Very much so. These are scripts that have worked their way through a substratum that is difficult to penetrate – the multitude of ideas and associations in Hannah’s mind that are theoretically related to the Big Themes of Our Old and Future World – scripts that at the moment of their revelation, in other words while being performed, feel like beneficent, splashing water that has been enriched with all the healing and hallucinogenic elements the substratum has released within it.

While this might be even more true of new skin than of Levitations, her first script is a meandering journey. A trip, in fact: we wind through a surprising landscape – it resembles the sultry Mexican- influenced southwestern part of the United States, where so much is going on today – a surprising landscape in which the distinctions between reality, dream, simulacrum and nightmare are unclear. By means of images and scenes that are as witty as they are precise, t traces an exciting dramatic arc, with themes like sexual abuse, violence, the mediatized world, artistry and the meaning of life, only to end by offering us an experience of something like… liberation? Hi, I love you are the final words, and they sound wonderfully fresh. Old sores seem to have healed. Old skin has been shed.

And look, the next show, the next script, is called new skin. This time, we know less about our whereabouts or the era we are in; is this an untouched primeval past or a post-apocalyptic forest? With extremely precise and musical words, the speaker – for simplicity’s sake I shall call her ‘Hannah’ – once again summons up the entire universe. And Earth, both as a wounded or even abused body and an unutterable force with which all wounded or abused bodies can identify, so that an unutterable Earthly force will fall to them. As Hannah says at the beginning of the show, this score has many
voices, voices of testimony and resistance, but new skin is far from being an unequivocal complaint. Again, the words seek out a winding, flowing and ultimately sparkling and dazzling path to liberation, a new birth, a new beginning.

Hannah De Meyer makes vital, intimate, vulnerable and powerful theatre. These scripts are at once the foundation and – as you can read for yourself as of now – the result of that. They are as solid as a rock.